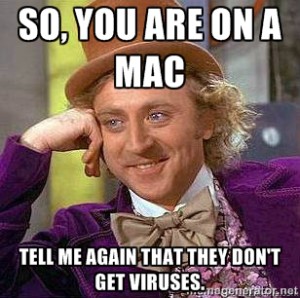 More than once I’ve heard someone say they won’t ever get a virus because they have a Mac.

Unfortunately that’s just not true. Mac’s can get viruses just as easily as any other kind of machine. It used to be that malware was written specifically for the Microsoft Operating System, because there were just so darn many of them out there. If our experience at Geek For Hire, Inc. is any guide, plenty of our customers with Apples are getting all kinds of malware.

(By the way, “malware” is the catch-all phrase for any software you haven’t deliberately chosen to load onto your computer. Remember from high school Latin that “mal” means “bad”. “Malware” includes viruses, spyware, rootkits, and more.)

In fact, way back in 2012, Apple itself recognized the flaw. In April, 2012, more than a half million Macs were infected by the Flashback Trojan bug. Shortly after that, PC Magazine reported that Apple “removed from its website the claim that its Mac operating system is not susceptible to PC viruses.”, and changed its tagline to “It’s built to be safe”.

Today, even more malware is being written specifically for the Mac OS. And Apple does not seem to be on top of getting fixes out to their users.  In an article by Digital Trends, they stated:

“Apple has also been criticized for being slow to deal with threats and shut vulnerabilities down. Rootpipe was discovered in October 2014, but the fix only came out this month (April 2015), and it only patches Yosemite, not older editions of OS X. To make matters worse, the patch doesn’t actually fix the problem properly. Apple’s big rival may have a bad reputation, but it has taken decisive action to tackle that perception.”

It’s best to protect yourself with a good anti-virus program for Macs. We like ESET’s Cyber-Security.

Questions? Comments? Feel free to post them below. I’ll try to respond to every single one!

Chris Eddy of Geek For Hire, Inc. has been providing computer service to families and small businesses with Mac’s and PC’s for the past fourteen years. His company is highly rated by both the BBB (Better Business Bureau) and by Angie’s List. You can find more at www.GeekForHireInc.com. Geek For Hire, Inc. provides onsite service to the Denver / Boulder / Front Range area. They can provide remote service throughout North America.

Geek For Hire, Inc. provides onsite troubleshooting and repairs for Mac's and PC's in the Front Range of Colorado, and throughout North America via our remote service. We also provide tips and review products and services to make your technology experience easier.
View all posts by Gail P. Eddy →
This entry was posted in Hackers, iPad, iPhone, Macs, Malware, Virus and tagged Computer repair, Geek For Hire, Ransomware. Bookmark the permalink.